Hello everyone, and welcome to my new post! Yes, I’ve decided to try and write more often, and this time I will do a bit of self-promotion. As you may, or may not, know, I love watching movies – I think they are great past-time and I find them relaxing. Lately, I have had some troubles concentrating for more than an hour, but for now I would like to think that’s because I wasn’t choosing good movies to begin with. What does that have anything to do with neuroscience?

Well, apart from writing this blog, I also write and edit for Gyrus Journal. Gyrus is student journal of neuroscience, where we write review articles about different topics: basic neuroscience, neurology, neurosurgery, and psychiatry. I have written some articles, and if you stumble across them, don’t judge me too hard – they are meant to teach us how to search databases, cite, and write in English, since our mother-tongue is Croatian. I feel very fortunate to be a part of this journal, since it helped me a lot in understanding of many scientific terms in English language, primary language of science; it also helped me to learn how to communicate with my authors, as well as how to dissect a topic I’m supposed to write/edit about. Of course, we also have reviewers, wonderful professors and scientists from University of Zagreb, who do the last editing before publication. (I would just like to say that we didn’t have reviewers from the very beginning, hence why some of the earlier articles perhaps lack in quality.) Lately, we have been struggling a bit with latest editions, but started to publish articles online – you can access them all on the link above. You can also follow us on Facebook page as well as Twitter!

In Gyrus Journal, you will also find shorter articles and movie&book reviews, where title of this post finally comes in play! So far, I have written five movie reviews, with three still waiting to be published. For my first one, I picked the obvious choice: Memento (2000) by Christopher Nolan. Apart from being one of my favourite movies in general, I think it truthfully portrays anterograde amnesia.

In addition to portraying Leonard’s fragile mental state that makes us question not only his current objectives, but also whether his recollections of past are reliable, or simply figments of his imagination and almost fatalistic wishes, Memento is different in comparison with other films of similar genre, simply because it truthfully portrays the slow agony of losing the principal neurobiological process – a human memory.

The second review I did was about movie that might not seem so obvious, but was quite intriguing: Side Effects (2013) starring Rooney Mara and Catherine Zeta-Jones. This movie also has a crime aspects but it deals with the psychiatric illness, for which we don’t know, until the very end, if it’s real or faked.

Although dealing with semi-real thesis, the question still remains how the movie influenced real world cases. Did it help with recognizing the ones feigning the illness, or just put extra strain on the patients dealing with the illness that is already under deep historical stigma? Regardless of being the rather entertaining thriller, we are left wondering whether the movie deepened the negative view of the various psychiatric illnesses in the general public.

What about you? Do you like watching movies – which ones are your favourite? If you watched any of these, please tell me what you think! I would love to discuss movies with you & I’m really interested what you watch in your free time 🙂 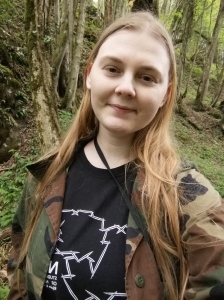