I hope you liked part 1 of my biospeleology field trip in Slovenia, because here is part 2! Here I write about other days & share the rest of my experiences.

The day started with making some spreadsheets and entering coordinates for various water springs. After that, we visited the Rivčja jama again, but unfortunately we found no Proteus (or anything else for that matter) in our traps. However, we found a very narrow entrance to the other part of the cave, aaaaand I got stuck. Like properly can’t-move-in-any-direction stuck. Most of you who never visited a cave probably wonder what kind of feeling that was. I don’t have a straight answer for that, since it’s more a range of emotions being experienced all at once; I wouldn’t describe it neither as panic nor fear, although parts of that were present. It was more a desperation that I’m not strong enough to wiggle out, mixed with frustration and adrenaline rush. I didn’t feel claustrophobia, but that feeling might sometimes be present as well. In the end, I managed to drag myself up that hole, and enter another part of the cave. Tjaša went even further, to my amazement, but I stayed back with Ester & Eva and collected as many pieces of another fox skeleton I could. This was was almost hole, but I only took few limb bones, skull, jaw bones, and vertebrate. *expect a video about it soon
After this ordeal, we went back to swimming in beautiful Krka and went back to school for quasi picnic (a barbecue on the school meadow).

Day six was day off; Bruno, Paula, and me went to Ljubljana and visited huge mall complex. Why? Because they have Whoop!, a trampoline park. In our defense, we were not the only adults there. After an hour, we went on our merry way to Burger King, and then a bit of shopping around. The most important thing I bought were hiking shoes. Paula helped me choose a pair (she specializes in orientation running, so knows a great deal about it), and they are pretty neat. But why Emina, why didn’t you already have ones? Well… That’s a long story, but I never had to walk this much before, and didn’t have to constantly change from my boots to rubber ones. So yes, before buying this pair, made for walking around in the forest, I wore my black combat shoes, with metal caps. One boot weighs almost 1 kg, so you can imagine how easy I suddenly walked everywhere. Just a note, specialized shoes exist for a reason.

On this particular day, I was on duty. I already wrote what that means, and it was exactly like that – preparing breakfast and making lunch&dinner. Nothing interesting happened, after my group returned we talked a little bit where they went, some determination of specimens happened, and we also had another lecture, about climate strike. 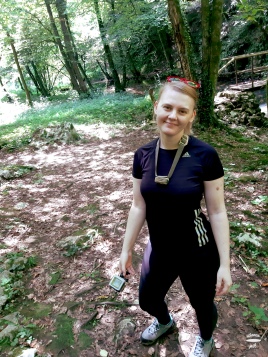 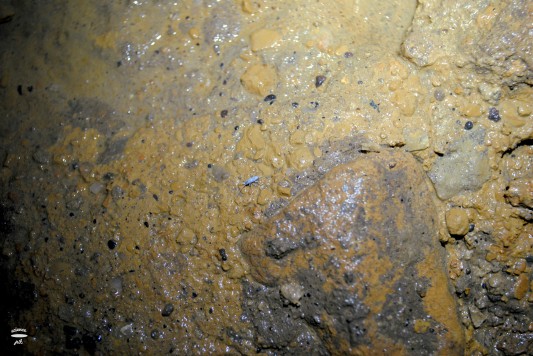 If you look closely, you can se Colembola sp.

This day was special because we were joined by Teo. I think he was Ester’s mentor for her Master’s thesis, but I’m not sure. In any case, Teo is an achieved biospeleologist and obviously knows a lot. First cave we visited, Jama pod Gradom, was nice, but I honestly don’t remember much, apart from the fact that we were walking around for kilometer or two, before realizing we parked in front of it. The second one, Blatna jama v Šici, was, to me, quite a difficult one. We spent more than 2 hours inside, climbed up, and down, and up and down, we crawled, and had to use the before-installed rope in order to pass some sections (not with equipment, just good old hold-the-rope and walk really closely to the rock). Well, the fact these were old lead to the unfortunate fact that Bruno fell in the water, after part of the rope tore. I wish I caught it on the video, but, by then, my camera was already completely out. We did caught quite a lot of Proteus, and I honestly didn’t realize how big they can sometimes be. *I have to check, but if the footage is salvageable, you can expect some kind of video
In the evening, I did some more determination with Anja & Tjaša.

First cave (Vodna jama pod Zijalom) was flooded, so we were hanging out in the front, trying to catch some more Niphargus (them) or taking videos (me). Then, we went back to Velika jama pod Trebnjem, the first one we visited and where we laid traps for infamous Leptodirus. Unfortunately, we found nothing, every trap was empty. Of course, we went back, and then some of us went looking for bats with bat group. This catch-mark-release activity has taken place a bit further from the school, near the small pond. The pond which also connected to a cave system, but had no entrance big enough for us to go in. So, two wild-life cameras were put up, as the word from the village was that at night, Proteus came out to play, um feed? Swim? Enjoy the moonlight? I’m still not sure, but next day I was told that they were captured on video. All-together, 23 bats were caught, with 10 different species being noted, which is a lot. Like huge, because when we first started, the bat group was optimistic with the estimate of “maybe 10 bats, and maybe 3 species”. I didn’t handle any bat, because 1. I don’t know how and 2. I have a perfectly rational fear of rabies.

Niphargus sp under the microscope

Tick in the tube

No caves today! I switched, and spent the day with amphibian group. And since it was the last day, we mostly chilled. We did try to visit one pond, but it turned out it doesn’t exist. The second one was actually really close to the cave I visited previously (Pekel pri Kopanju), and there we found quite a lot of frogs (all stages) and salamanders. Honestly, they looked really cute too! Afterwards, we went to Krka for quite a long time (*and quite a nice footage!). For dinner we actually had a whole dinner&party, but I had to miss that one due to migraine.

Last day was un-adventurous, we packed, ate a lot at McDonalds, and finally arrived home. And I’m looking forward to going again.
I would like to say a big thank you to Ester, Tjaša, Anja, Eva, Teo, and Živa, as well as our organizers.